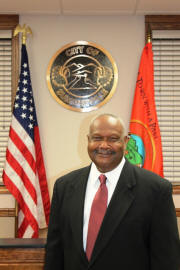 Harry Harvey has lived in Summerville since 1971.  He is a retired educator who has worked in the Chattooga County School System for over forty years.  Harry and his wife Annie have four grown children.  He has been a Principal at Leroy Massey Elementary School and Pennville Elementary School; Assistant Principal/Teacher at Summerville Middle/Summerville Jr. High and Chattooga High School in the Chattooga County School System.  He has also served as a Teacher Supervisor/Trainer in Northwest Georgia.

Harry's interests are: travel, reading, golf and fishing.  He is active and interested in the community.  He is a member of New Bethel Baptist Church and a member of Holland Lodge #47.  Harry belongs to several professional and civic organizations.

Harry was elected to the City Council in November 2009 and was elected Mayor in March 2011.  He was reelected to a four year term as Mayor in November 2013. Being elected to the Summerville City Council and as Mayor is an honor and an opportunity to serve the citizens of this great city.  Harry's goals are continued improvement and growth of the finances and infrastructure of the city. The mission and vision of the City of Summerville are the guiding forces for these goals.